Hot on the heels of the UK premiere of En Attendant Godard on thelatest.tv, the channel has also screened Afterimages as part of their FilmFest at 8 season.

The screening took place on Freeview channel 8 or Virgin 159 in the Brighton area, as well as via livestreaming at thelatest.tv, on 7 December 2014.

Beg Steal Borrow Films is delighted that the film was selected for screening – and hopes that some people managed to catch it while it was on.

The logo for latest.tv, who screened Afterimages on 7 December 2014.

In other news, En Attendant Godard has also been selected for screening at two places so far in 2015. The film will enjoy its Italian premiere at the Associazione Kilab in Rome on 28 February, before then being screened at B-Film at the University of Birmingham on 13 March.

What is more, Selfie also enjoyed a preview screening at the University of Roehampton’s Film Society on 25 November 2014, where it was greeted with an enthusiastic reception.

It seems as though Afterimages has found its spiritual home – Lithuania!

After two screenings in Kedainiai City in late 2013, Afterimages recently enjoyed another screening in Gelgaudiškis at Cinema Camp, an event run by Meno Avilys, an NGO based in Vilnius that specialises in film education and restoration – as well as producing DVDs of great Lithuanian films.

Around 70 people were at the screening, making it the busiest Beg Steal Borrow film screening so far – and the Q&A afterwards was enthusiastic and engaged.

Afterimages screens at Cinema Camp in Gelgaudiškis, Lithuania, on 25 July 2014.

William would like to thank all of the organising team for a wonderful welcome, for fantastic hospitality and for all of the kindness and generosity that everyone at Cinema Camp, especially the Meno Avilys team, showed. 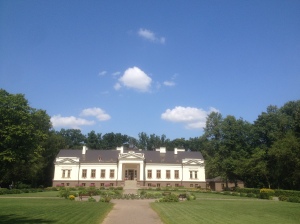 Maybe this will be the next in a long line of events and screenings in Lithuania!

Beg Steal Borrow has added its first four features to Vimeo for viewers to watch for free. 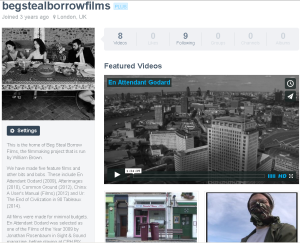 Anyone who has had a chance, therefore, to catch En Attendant Godard, Afterimages, Common Ground or China: A User’s Manual (Films) is welcome to go to the Beg Steal Borrow Vimeo page and to watch the films there.

Please pass on the word – and enjoy the films!

While we are putting the finishing touches to Ur: The End of Civilization in 90 Tableaux, the other Beg Steal Borrow films continue to eke out an existence of their own…

Afterimages has just enjoyed two screenings on 18 December 2013 at the Kedainiai Sviesioji gymnasium in Kedainiai City, Lithuania. The screenings were arranged courtesy of Benita Paplauskaitė, a film student at the University of Roehampton, London, and who occasionally gives classes when she returns home during the vacations.

Having seen Afterimages over the course of her studies at Roehampton, Benita decided to show the film to students at the gymnasium. Here is some of the feedback that Benita provided on how the screenings went.

Students at the Kedainiai Sviesioji gymnasium, Kedainiai City, Lithuania, discuss Afterimages. This and the photo below are courtesy of Benita Palpauskaite.

“I just came back from school it was so much fun! Don’t even know where to start. So we had two screenings today and there were about 80 people overall (40 in the first screening and 40 in the second).

“They are all in the 11th grade (17 year olds). Everyone was really excited and it was so funny to watch their reactions. Most of the people found the film hard to understand. Very interesting thing – girls got it better than boys. Everyone got their own idea what the film was about. Some said it was about isolation, others thought it was about relationships. We had a short discussion with one of the classes and students had many questions and comments.

“The funniest and most interesting for me came from one girl who said: ‘The film was just like Hamlet – so smart yet so hard to understand.’ I asked them why they find the film hard to understand and they all agreed that it is most likely because of the film’s pace. They found it hard to stop and relax and came up with an idea that the film takes you out of reality, routine, yet it is still purely about the routine itself (if that makes sense).

Students at the Kedainiai Sviesioji gymnasium, Kedainiai City, Lithuania, discuss Afterimages after a screening on 18 December 2013.

“Everyone really enjoyed the ending! I wish you could have seen it (those cruel Lithuanians).

“Overall, students said that it was very intelligent film.”

We feel enormously flattered both by the screenings themselves – and also about the wonderful and engaged feedback offered. (Especially any feedback that suggests the movie is ‘intelligent’!)

So our thanks go to Benita for her arranging of the screening – and to all those who watched the film.

Afterimages also enjoyed a screening in early 2013 at the University of Tübingen, Germany, courtesy of Rainer Schelkle. It’s nice to know that Afterimages therefore continues to have an afterlife…

It is with great pleasure that I’d like to share some informal feedback that I have received on various Beg Steal Borrow films.

First of all, the great Mohsen Makhmalbaf contacted me briefly to write: “I like En Attendant Godard.”

Secondly, the prolific Josh Hyams also wrote to say that that he “thought your films are beautiful.”

“China: A User’s Manual: I adored it. Really. It spoke with me. To me. It was like memories and thoughts I too have had. A prosthetic memory. Like I was on the back of the screen mirror. I knew some of the stories of course from talking to you. But they were also like reruns of my memories. Memories I did not know we shared. It’s so dense and yet light and free. Antonioni, Marker, the third-image. The epistolary form so like Montesquieu’s Persian Letters in light and sound. I had read almost all the books and stories you mentioned. Knew all the films and scenes you were referencing. The news stories and made up ones too. And recognised a China that I know and feel. I felt like you were talking to me. And wondered if it was not me, and I did not know you, would it be the same. We need to do something with this film out here.

“I really like Common Ground, too. Haunting… It was a dream-like recollection of Afterimages and to a lesser extend En Attendant Godard. Totally appreciate you sending them. A breath of fresh air.”

What wonderful feedback from such esteemed people. I am humbled, but also inspired by this feedback. Many thanks! Let’s carry ourselves with confidence to the next Beg Steal Borrow shoot, provisionally titled Endemic, scheduled for shooting in France in July 2013!

Esteemed film critic and academic Catherine Wheatley has mentioned Afterimages among her Films of the Year 2010, alongside work by Gaspar Noé, Lucrecia Martel and Catherine Breillat.

Wheatley says that she would take films like Afterimages “over the likes of the overblown and overrated I Am Love any day of the week.” We are honoured.

Afterimages has played at the Centre for Research into Film and Audiovisual Cultures (CRFAC) at the University of Roehampton, London.

The screening was admirably attended, and the crowd seemed to enjoy the film – and its opaque nature provoked some intense discussion.

The Internet Movie Database page for Afterimages has appeared online.

The film is still awaiting five votes in order to get a score – so please do get going and vote generously!

Afterimages has played at the 2011 Deleuze Studies Conference in Copenhagen.

This is the third screening of the film in Denmark’s capital following the film’s two screenings during CPH PIX 2011.

The audience was partisan but enthusiastic about the film.

Afterimages has played at the Film-Philosophy Conference 2011, hosted at Liverpool John Moores University in Liverpool.

The screening was enjoyed by a generous academic crowd, who beleaguered the director with their smart questions afterwards.

A line-up of the full conference programme can be seen here.