The first video is for the single, ‘I Love an Eyesore (LBJ ’60)’, which was released by Jezus Records on 5 May 2015, while the second is for ‘Boy In Uniform,’ which is set also to be a single from the band’s new album, Kennedy.

The ‘Eyesore’ video sees archive footage of Lyndon Baines Johnson mouthing the lyrics to the song as the band, disguised in LBJ masks, frolic and play in a grand-looking house. At certain points, LBJ is pictured giving various versions of the famous ‘Johnson Treatment’ to the band members.

The video for ‘Boy in Uniform,’ meanwhile, sees the band in pseudo-Village People outfits performing an illegal gig at an unspecified venue. Part way through the song, the police arrive to shut down the gig, but two enthusiastic young cops are seduced by the music and end up acting out a live version of Banksy’s famous ‘Kissing Coppers’ mural.

The band’s album, Kennedy, is a concept album based upon political events and figures from the USA in the 1960s.

In addition to the band, the ‘Boy in Uniform’ video also features Beg Steal Borrow regular Dennis Chua as a police chief, with newcomer Ariel Pozuelo playing one of his amorous underlings.

Beyond that, Beg Steal Borrow’s Selfie enjoyed a warm reception at a screening at the Cinémathèque québecoise in Montreal, Canada, in late March. Keep reading for news of any other Beg Steal Borrow screenings coming up!

1. Selfie will enjoy a preview screening at the Cinémathèque québecoise in Montréal on Saturday 28 March at 7pm. Entry is free and all are welcome, although space is limited at this preview screening.

2. Our lovely friends at FilmFest on TV will be showing En Attendant Godard again on Sunday 29 March at
9pm, as well on Saturday 4 April, also at 9pm.

3. Our video for Extradition Order’s ‘Boy in Uniform’ is about to go live, while we have also filmed a new video for their song ‘Love an Eyesore (LBJ ’60)’.

The Montréal screening of Selfie coincides with the annual Society for Cinema and Media Studies (SCMS) Conference, which is taking place there between 24 and 29 March. Sequences from Selfie were filmed at the 2014 SCMS Conference in Seattle.

Meanwhile, the FilmFest on TV screenings of En Attendant Godard can be found on Freeview channel 8 or Virgin
Media 159 in the Brighton area or online across the world at www.thelatest.tv.

We shall announce in a separate article when ‘Boy in Uniform’ goes live – but the video is currently ready and we are awaiting word from the band’s label regarding when to let it loose.

Nonetheless, in the meantime, we recently shot a second video with the band, ‘Love an Eyesore (LBJ ’60)’, a song that is about Lyndon Baines Johnson’s misguided efforts to be Presidential Candidate for the Democrats in the 1960 American general election.

The video features the band dancing and performing in LBJ masks and will be edited over the coming weeks. 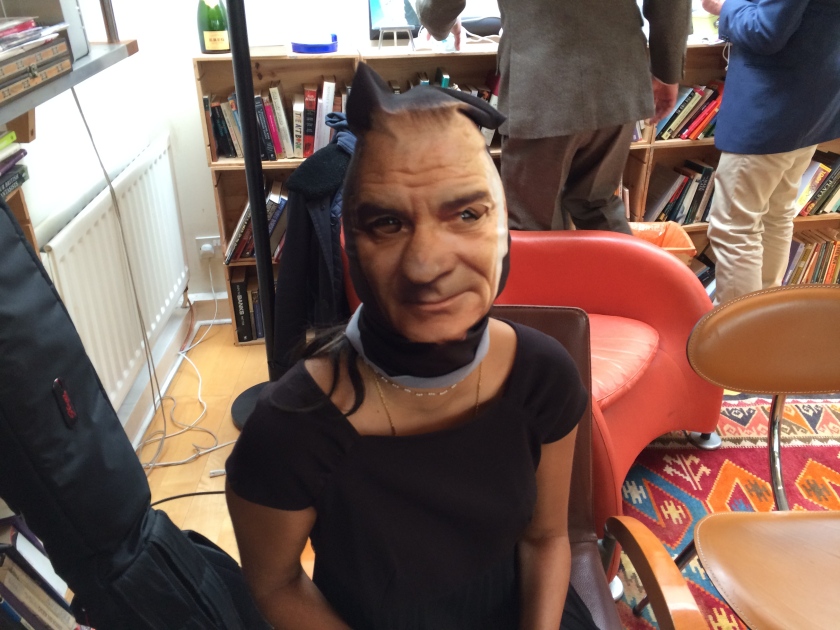 Drummer Radhika Aggarwal wears her LBJ mask during the shooting of ‘Love an Eyesore (LBJ ’60)’ for Extradition Order.

In other news, En Attendant Godard recently enjoyed wonderful screenings with the Associazione Kilab at the CinemAvvenire in Rome, at B-Film at the University of Birmingham, and also as a film screened as part of the Film History & Criticism module that is taught to first-year undergraduates at the University of Roehampton, London.

Common Ground also enjoyed a recent screening as part of FilmFest at 8 on thelatest.tv on 1 March.

We hope that further screenings for Selfie, Ur: The End of Civilization in 90 Tableaux and The New Hope will also take place in the next few months. Indeed, we are keeping our fingers crossed, and hope that the Like that Sheffield Doc/Fest recently gave to Selfie on Vimeo is something of a good omen.

With the finishing touches being put to The New Hope, and with Selfie and Ur: The End of Civilization in 90 Tableaux slowly beginning to be submitted to select festivals (keep your eyes open for screenings!), Beg Steal Borrow Films has moved for the first time into the world of music video direction.

William Brown directed the video for Extradition Order’s new song, ‘Boy in Uniform’ in early December 2014. The video was edited over the Christmas period, and is now just awaiting grading and a confirmation of release date from the band’s label before becoming available shortly – online and in other places, no doubt.

The clip tells the story of the band playing an illegal concert that the police disrupt. However, the music is just too seductive for the coppers, who soon find themselves seduced into having fun, rather than doing their job! 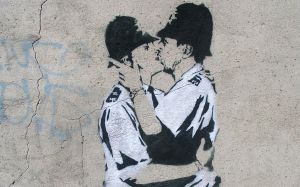 Beg Steal Borrow newcomer Tony Yanick acted as assistant director, while the crew was made up of Angela Faillace, Bahareh Golchin, Sara Janahi and Dasha Sevcenko.

Friends of the band acted as party goers and crowd as shooting took place in Roehampton, London on 6 December 2014.

Extradition Order‘s new album, Kennedy, is due for release in early spring 2015.

Extradition Order were also scheduled to appear in God Particles, a Beg Steal Borrow production that we had hoped would be filmed towards the end of 2012, but which for logistical and other reasons remains ‘in development.’

Keep an eye out for that film should it ever materialise…!

In the meantime, check out Charlie’s video here.

Charlie has also been busy of late shooting – again with Tom – the short film Happily Ever After?, written by Segun Murray Ogunsheye and featuring the voice of Nigel Andrews.

Happily Ever After? recently screened at the Vibe Gallery in Bermondsey, where it met with a very warm reception. It was made under the auspices of Firehouse Creative Productions, a collaborative network of filmmakers based in London and elsewhere.

Charlie has also been producing Insomniacs, directed by Charles Chintzer Lai and starring Vanessa Kirby and Imogen Stubbs. This project is in post-production, so more no doubt is to follow…!