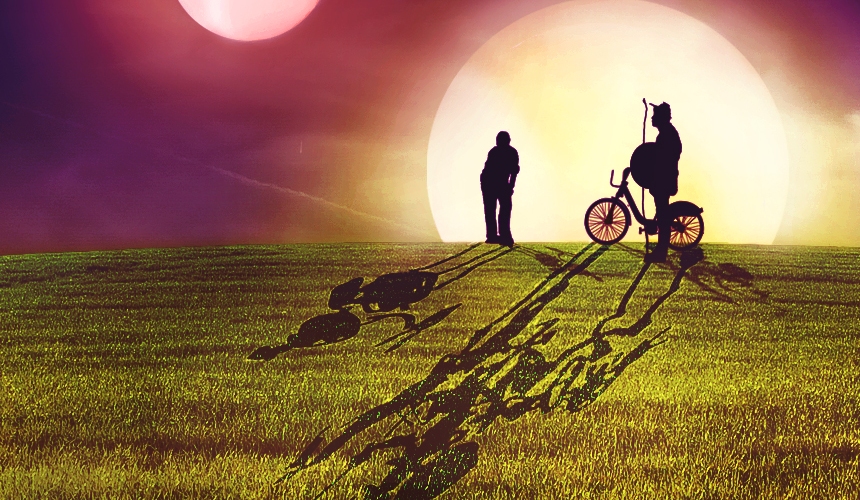 Beg Steal Borrow is excited and proud to reveal the new poster for The New Hope.

Designed by the talented Angela Faillace, the poster shows leading characters Dennis and Hadrian silhouetted against two suns as their shadows are cast over an expanse of grass.

The poster draws its inspiration from Star Wars and in particular one of the posters for The Phantom Menace, in which a young Anakin Skywalker casts the shadow of Darth Vader, thus suggesting his shadowy destiny.

Here, however, the shadows that Dennis and Hadrian cast are, respectively, of Don Quixote and Sancho Panza as in the 1955 sketch that Pablo Picasso created of the two characters for Les lettres françaises.

Blending Star Wars with Don Quixote, then, the poster conveys the key themes of the film, which is an adaptation of the first part of Miguel de Cervantes’ great novel – although in this updating of Cervantes’ story, the main character believes he is not a knight errant, but a Jedi knight.

Finally, the grassy expanse conveys the way in which the film takes place mainly in London’s Hyde Park, itself a common ground that is free for anyone to visit.

The setting in this way ties in with the democratic aspirations of the film. Not only is it a movie about a man who wishes to be a Jedi knight (thus proving that we can be whoever we want to be), but so is the movie’s zero budget a bit like tilting at the windmill of the mainstream film industry.

If one charges with enough conviction, though, maybe one can give hope to people, by showing that one does not need expensive equipment and flashy CGI to make a film, but that there is equally magic in a park, a Boris bike, a scooter, a stick and a dustbin lid.

Designer Angela Faillace is currently a student at the University of Roehampton, London, where director William Brown also teaches. She also designed the poster for Selfie, her work having caught William’s eye through the posters she designs for the Roehampton Film Society, which she also runs. Angela also worked as a crew member for Beg Steal Borrow’s video of Extradition Order’s ‘Boy in Uniform’ and can be seen in a couple of shots in Selfie.

Designed by the talented Angela Faillace.