Our campaign to raise money for  may be in full flow – having surpassed the 50 per cent mark, with £1,305 left to raise in 18 days – but there is no rest for the wicked as cinematographer Tom Maine and I headed out on 15 May 2017 to start work on a new short essay-film, Sculptures of London.

A map showing the locations of all of the different sculptures that we are going to shoot for Sculptures of London.

Having gone through thousands of sculptures in preparing for this film, we have narrowed the film shoot down to images of about 200 different pieces of work – dotted all over London. And so yesterday, we had our first day of filming, starting over in Southall Park, where we shot Rachel Silver’s Sculptural Mosaic Globe. 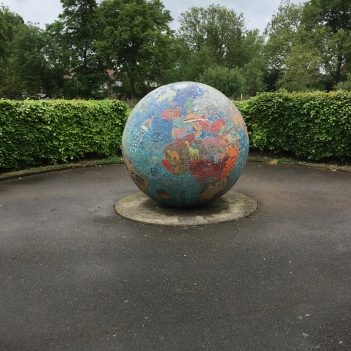 We then headed to the Hammersmith and Shepherds Bush area, where, among other things, we were saddened to see the Elliott Brook’s Goaloids had been removed from Shepherds Bush Green. We shall research what has happened to this sculpture!

We then did a stint in Kensington Gardens, looking in particular at George Frederick Watts’ Physical Energy and Henry Moore’s Arch – two sculptures that already feature prominently in Beg Steal Borrow’s The New Hope (in which Dennis attacks Physical Energy, mistaking it for a rancor).

Henry Moore’s Arch from across the Serpentine.

We then headed to Sloane Square, where we filmed some of the work in and around Belgrave Square and Cadogan Gardens. In the latter square, David Wynne’s Dancers and Girl with Doves sit in private gardens.

This begs the question about whether this art is public or not, since one can see it from the public space of the pavement, but one cannot approach it to see it in detail unless one is with a local resident. 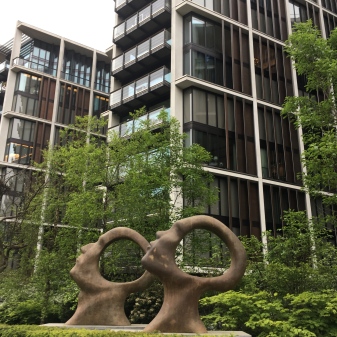 We then got in some shots of Jacob Epstein’s Rush of Green and Simon Gudgeon’s Search for Enlightenment at One Hyde Park, before heading around the park to Still Water by Nic Fiddian-Green, the horse’s head that stands near Marble Arch. 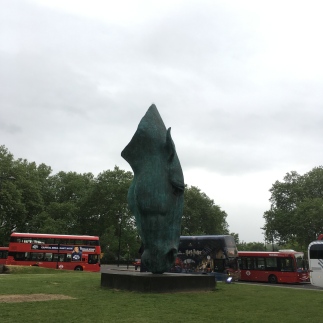 Finally, we headed to Edgware Road and Paddington, where we got reacquainted with Allan Sly’s Window Cleaner, a sculpture that also features in Circle/Line, which you can see at its premiere at the East End Film Festival on 3 June 2017 at 5pm at Old Spitalfields Market.

We then ended with a trip to see Paddington Bear himself inside the station – but not before going to see Sean Henry’s Standing Man and Walking Man by Sheldon Square.

We were sad to see that Jon Buck’s Family had also been removed. Perhaps the way in which sculptures can go walkabouts will merit another film at a later point in time! 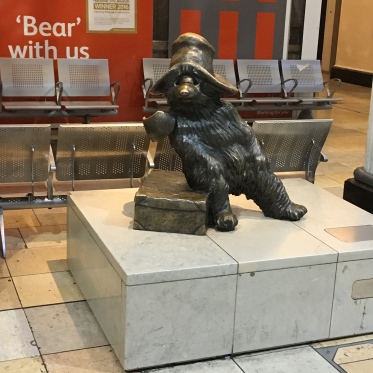 But we shall keep you updated with this and other projects as we make them. Please do support Beg Steal Borrow’s efforts to make different and strange films…!

One thought on “Filmmaker’s Diary #1: Sculptures of London”