In a Q&A session after the screening of The Golden Dream, director Diego Quemada-Díez compared his film to a western.

The film follows the journey of four youngsters travelling from Guatemala towards Los Angeles across Mexico – in a bid to have a better life in the north of America. They include Juan (Brandon López), Sara (Karen Martínez), Samuel (Carlos Chajon) and an Indian boy, Chauk (Rodolfo Domínguez).

During their arduous and unforgiving journey (not all them make it to the United States), we see Juan pose for a photo session dressed as a cowboy, while Chauk is dressed as an Indian.

Although the analogy is neither perfect (Juan is not necessarily a Yankee, even though he is both most determined and most successful in his bid to get to the USA) nor subtle (to have Chauk pose as a ‘Red Indian’ is something of an ‘obvious’ image), we sense nonetheless that Quemada-Díez is suggesting that the migration of Latin American peoples (here, from Guatemala) to the USA is a direct result of the settling in what was to become the USA of white Europeans.

That is, The Golden Dream seems to suggest that it is American/US history, replete as it is with imperial/economic expansion into the rest of the continent, alongside a longer history of European colonialism, that has caused the economic imbalances that lead to people wishing to travel north to places like Los Angeles in order not to live in a slum (Juan), and in order not to work on a garbage tip (Samuel).

However, where (in broad terms) the western is about the taming and ‘civilisation’ of nature, in particular via the suppression of the savage ‘Indian’, here nature is the dog-eat-dog world of the railways and stopovers that span the length of Mexico – and its conquest ultimately, for Juan, at least, is (*spoiler*) to eke out a similarly ‘bare’ life working in a meat factory north of the border.

That is, the ‘golden’/American dream is severely compromised – as in fact ‘civilisation’ has resulted in huge economic imbalances that in turn bring about a morality that is far removed from that of Ransom Stoddard and Will Kane. Indeed, The Golden Dream does not pull its punches in terms of showing how fraught life is for those on the margins of the USA and who are hopeful of ‘getting in’ (as one apparently ‘gets in’ to ‘the industry’ that is cinema – without any need to qualify ‘the industry’ as ‘the film industry’, since for many people the manufacture of images is the only industry that really counts).

Quemada-Díez also mentioned Eduardo Galeano’s blistering text, The Open Veins of Latin America, in his Q&A. In other words, he (Quemada-Díez) seems determined to locate his film within a history of exploitation that is indeed made most clear at the film’s climax in the meat factory: necessary labour is taken on without papers and job security, such that the USA is now importing from countries south of its border the single resource that is perhaps Latin America’s strongest, its human workforce.

The Golden Dream has an excellent bedfellow the similarly-themed and disturbing film, Sin Nombre (Cary Fukunaga, Mexico/USA, 2009), while also offering a similar structure to Michael Winterbottom’s masterful migration tale, In This World (UK, 2002).

Indeed, Winterbottom – among many other filmmaking luminaries, including Fernando Meirelles, Gillo Pontecorvo and others – is thanked in the film’s end credits. As are some 600 real-life migrants/would-be migrants whom the filmmakers encountered and filmed along the way during the film’s making. 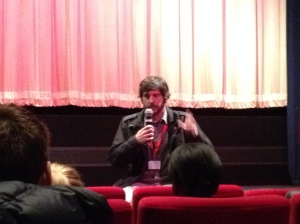 Diego Quemada-Díez gives a Q&A at the London Film Festival 2013.

Although staged, then, The Golden Dream is a strong film that has many documentary elements – not least real-life participants in such fraught journeys (Sara’s fate, in particular, is too horrific to recount here).

Nonetheless, The Golden Dream also features many poetic elements. Quemada-Díez has a fascination with trains – a key component of the journey, as well as using spaces that are former buildings now reclaimed by nature. It is as if we have, then, something like an anti-western – the return of the ‘wild’, the ‘savage’ to haunt the USA, because it is upon the wilderness and the ‘savage’ that the USA relies – much as the tradition of Thanksgiving is founded upon European settlers in America receiving aid from native Americans, who (broadly speaking) were then summarily exterminated in recognition of their help.

Particularly of interest is the way in which ‘dream’ images of snow, initially linked to Chauk, who has never seen snow, become the reality of Juan. It is problematic that the Indian boy must be sacrificed for Juan’s ‘dream’ to come true; but the truth is far from being as beautiful as a dream, and snow certainly is nothing like gold. One dreams of comfort, and instead one has cold.

One does wonder why Chauk’s native dialogue is not subtitled; while it conveys the way in which Juan, Sara and Samuel do not understand what he is saying, it also runs the risk of having Chauk appear an incomprehensible ‘other’, a fetishised ‘body’ who in fact cannot speak, because no one understands him. That is, while we in fact are given access to Chauk’s dreams (of snow) and visions (of Sara, after she has been separated from the boys), we are at risk of having no ‘real’ access to him, because we (Western viewers) are not privy to his words. The decision is as problematic, then, as it is pointed.

But Quemada-Díez has made a superior film about the issue of economic migration/would-be migration – and his ability to mix the documentary with the poetic, potentially problematic in that he might mythologise too much what is a real world issue, in fact seems sensitively handled and makes for harrowing viewing.