Selfie, the new documentary/essay film from Beg Steal Borrow, has been completed.

The film, which is comprised almost uniquely of selfies, was shot predominantly in February and March 2014. It combines footage of its maker, William Brown, at home and at work during the shooting period, as well as in locations as diverse as Basel, Paris and Seattle. 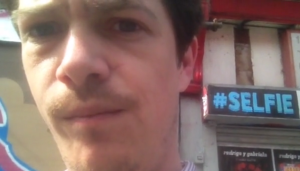 William Brown takes a selfie in his film of the same name.

It also involves a voice over that considers the obsession with self-recording to be a virus. Perhaps the biggest epidemic of the contemporary world. Given that the word selfie enjoyed a 17,000 per cent increase in usage in 2013 alone, the film is certainly a timely meditation on a contemporary phenomenon.

The film will be submitted imminently to film festivals – as will Ur: The End of Civilization in 90 Tableaux and The New Hope, the latter of which goes into post-production imminently. Look here for imminent screenings (or contact William Brown if you are interested in showing or seeing the film elsewhere).