What is a title?

In some senses, a title gives to things an authority, a name. Something that is titled is also entitled. To have a title, to be titled: these are things that connote importance.

A title can also sum up a work of art, or even a human being. Or rather, the title Lord Snodgrass not only sums up a human being, but it also covers up that human being. For, ‘Lord Snodgrass’ tells us little about a flesh and blood person who has weaknesses and foibles like everyone else. Instead, the title becomes inhuman, a symbol of power. If you don’t have a title, you are nothing.

There is naturally a tradition within pictorial art – but less so in other forms – for works not to carry titles (even if they carry signatures).

But in film, it is quite rare for a work to be untitled.

But if titles wield power and impose meaning upon a person, then they might also do the same for a work of art, including a film.

As ‘Lord Snodgrass’ takes us away from a flesh and blood human being, then, does a film title not in some senses take us away also from the film itself?

Perhaps it is for this reason that John Torres gives to one of his short films the improbable title of Wala kaming pakialam sa demokrasya. Ang gusto namin: pag-ibig, pag-asa at ang kamukha nito/We Don’t Care About Democracy. This Is What We Want: Love, Hope and Its Many Faces (Philippines, 2010).

In its very unwieldiness, the title gets us away from an imposed meaning, and instead perhaps reminds us of how titles impose meanings, thereby perhaps allowing the film to ‘speak for itself’ – without the title interfering.

Indeed, in giving to us an unrememberable and convoluted title, perhaps Torres asks us to get away from normal cinema, which is defined by titles, and into a new realm of cinema, perhaps even a non-cinema (as per the non-films that Torres’ Philippine compatriot Khavn de la Cruz creates – often using equally impossible titles), in which we see images not constricted by the meanings of words and titles, but images that speak for themselves as images. Strange, alien, perhaps undecipherable – the essence of cinema, but which by virtue of being unquantifiable and unsellable without titles, language and meaning, become non-cinema because not ripe for capitalist exploitation.

Except for the fact that Torres’ short film is all about titles, because as the action of the film unfolds – as actors Edgardo Maynar and Manilyn Glemer discuss their relationship on a bed – we get simultaneous English-language and Mandarin titles sprawling across the bottom and the right-hand side of the screen respectively.

Similarly, Maryam Tafakory’s I Have Sinned a Rapturous Sin (Iran/UK, 2018) also involves titles working their way into the fabric of her short film – be they written in white on a black cloth as she writes out the words of Forough Farrokhzad’s poem, ‘Sin‘ (from her collection The Wall), or as words from the poem appearing in various sizes across the frame of the images of her film.

It is widely proven that when viewers watch a film with subtitles, their eyes spend a long time looking at the subtitles in order to read them, meaning that their eyes cannot spend so long looking at the image itself. Especially if the film involves fast motion and a fast cutting rate, then this means that viewers watching a film with subtitles miss vast amounts of visual information presented to them – more than the already huge amounts of information to which they do not attend even when the film does not have subtitles.

It is notable that Torres’ film involves a discussion of fidelity, while Tafakory’s is also infused with exploring active female desire in the context of an Iran that seeks systematically to repress that desire, as is demonstrated in the film by the use of footage of imams and other figures of authority explaining how to prevent women from feeling desire (feeding them lettuce is put forward as a decent ploy).

The films do not quite use titles in the same way, but they do in some senses reflect upon the same issue, which might be as follows: to spend one’s time looking at the subtitles rather than the remaining contents of the image is thus in some senses to be unfaithful to the image.

Indeed, in I Have Sinned… one of the talking heads from the film’s found footage suggests that to look is at the root of desire, and that if one does not look then one might not fall into sin.

Perhaps it is true of films: titles (which perhaps erroneously are referred to most commonly as ‘subtitles,’ even though they dominate our attention) force us to look away from the film itself and to desire instead not the film as it is, but the film as it is controlled by the use of language.

So in some senses, then, titles impose a temporality or a rhythm on images – they subject images to the time of translation and control – rather than allowing images to be free, to breathe at their own rate, to be themselves.

Titles, then, in some senses betray images – as René Magritte perhaps knew all too well in adding to his 1948 painting of a pipe the title Ceci n’est pas une pipe, or ‘this is not a pipe.’ And what is the official title of the painting? La trahison des images, or ‘the treachery of images.’ For the title betrays the image, just as the title also forces the viewer to betray the image by imposing on that image a meaning that curtails that image’s potential to mean so much more. (Khavn may yet have it right when he says of all of his movies that ‘this is not a film.’) 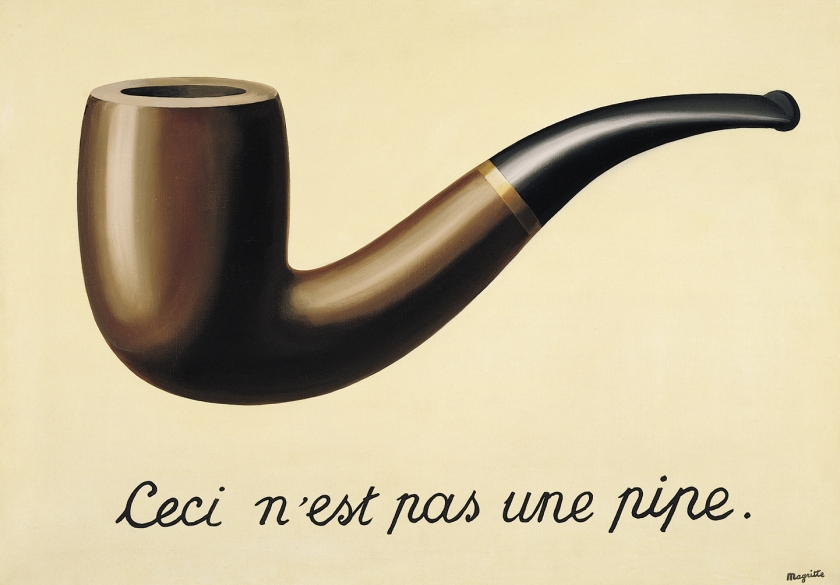 But there is yet more.

For as Torres’ film continues, the titles come to speak for the male character, suggesting his own thoughts of infidelity to his partner. That is, the titles do indeed come to signify infidelity – to the woman and perhaps to the cinematic medium, but reducing to literature something that is cinematic (just as cinema routinely is reduced to scripts by film industries that must pre-approve all movies in their literary form before they even have a chance to become movies at all).

For Tafakory, meanwhile, the whisper of her voiceover, the distributed nature of her titles (sometimes hiding in the frame, sometimes announcing themselve boldly) and the pictorial nature of the Farsi script all ask the viewer to indeed be unfaithful in some senses to the image, but in other ways the titles also ask our eyes to caress the image, to hunt for the titles, which themselves are incomplete.

That is, Tafakory’s use of titles means that titles work against themselves (even if in some respects it chimes with the increasing desire for film producers to create expressive titles that are embedded into the film’s mise-en-scène, including for those hard-of-hearing audience members that need the titles in order to follow the film’s action).

While Torres plays explicitly with infidelity and treachery in his titles, Tafakory induces a sensual relationship between text and image, as the female figure that we also see remains mysteriously hidden behind her hair – in a fashion not dissimilar to Mania Akbari under bath foam in her and Mark Cousins’ other homage to Forough Farrokhzad, Life May Be (UK/Iran, 2014), and in opposition to the speaking imams who are all given faces. It is as if language here is courted precisely in order to bring us to a ‘sinful’ relationship with the film – which wants to explore the poetry of sin and the sin of poetry rather than the straitjacket of prosaic desire.

(My memory is not working properly – but the use of the whisper also recalls the female whispers that are used extensively in I think Samira Makhmalbaf’s Sib/The Apple, Iran/France, 1998… but my brain not be remembering properly.)

In both cases, then, the ongoing and problematic relationship between language and images is intelligently and beguilingly explored, unsettling at all times our understanding that a film has a singular, controlled existence.

For, if we are not sure whether we fully understand everything, and if we are not sure which ‘version’ of the film is the correct one (with or wthout subtitles? even if with subtitles, which titles?), then in some senses the film remains mysterious, sensual, other and alive. We can have a loving relationship with such a film, rather than the sort of controlling relationship that patriarchal logocentrism claims is love, but really is a kind of imprisonment.

Torres and Tafakory thus paradoxically set cinema free. Long may they continue to do so.