Tom and I went out on 8 June 2017 – the day of the UK General Election – in order to do our fifth day of shooting sculptures.

Perhaps appropriately, we started at Highgate Cemetery, where we took a portrait of Karl Marx, which also made an appearance in our film, The New Hope. 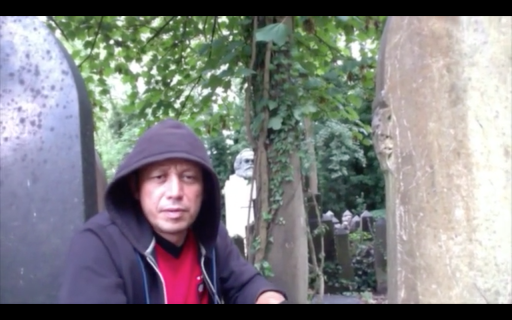 Dennis Chua with Marx in The New Hope

We then headed over to Golders Hill Park to see Patricia Finch’s Golders Hill Girl, and on to the Swiss Cottage area to see Sigmund Freud.

After finding a sculpture the name of which we do not know by Swiss Cottage Library, we took a quick bus over to Camden Stables, where we found the Amy Winehouse statue, before walking to the Regent’s Park, where we took shots of the Matilda fountain and two works by Albert Hodge, The Lost Bow and A Mighty Hunter, which both feature cherubs attacking birds.

We also found an eagle near the Island Rock Garden, although alas could not afford the entry fee to shoot Henri Teixeira de Mattos’ Stealing the Cubs.

Over to Rossmore Street we wandered to see Charles Hadcock’s Echo, before then finding Barbara Hepworth’s Heron on the side of Heron House on George Street and some of the more traditional statues on Portland Place. 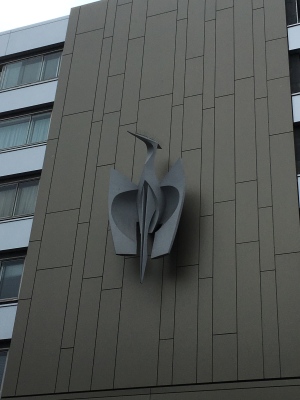 Naomi Blake’s View – which lives in Fitzroy Square Garden – was perhaps my favourite sculpture of the day: a beautiful piece in and of itself, it is not dissimilar to Hepworth’s Single Form in Battersea Park, which we shot on day three. Nonetheless, View seems to invite both touch through its smoothness as well as interaction as one not only looks at it, but also through it and to what lies beyond. 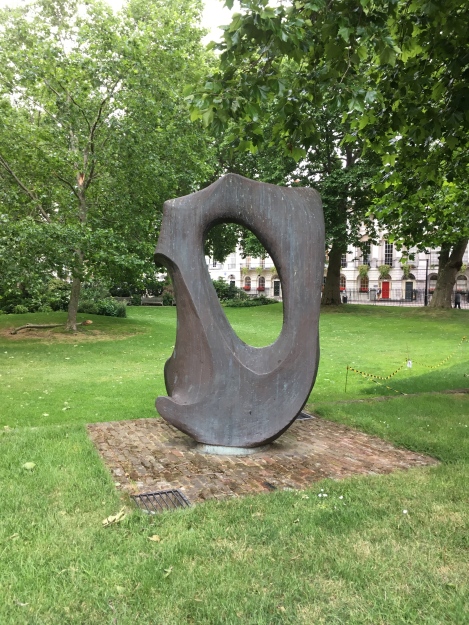 Inside St Pancras, we then filmed Martin Benning’s statue of Sir John Betjeman (who features in St Mary Magdalen’s Home Movies) and Paul Day’s The Meeting Place, well known to Eurostar travellers as the two lovers who greet people as they arrive in London.

Over the British Library, where we took in Eduardo Paolozzi’s Newton, before we then stumbled across some massive sculptures – from what we could tell unnamed – in front of the St Pancras Parish Church. These figures with melded and buried heads really were surprising: monsters merging with each other and with Earth, like fallen gods wandering lost in the land of the humans. 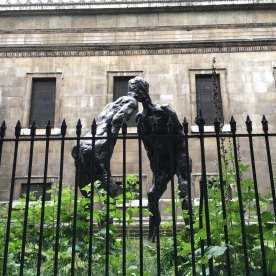 We then wandered down to Tavistock Square and Gordon Square, where respectively we filmed statues of Mohandas K Gandhi and Virginia Woolf, and Rabindranath Tagore and Noor Inayat Khan.

By the School of Oriental and African Studies (SOAS), we filmed the Armillary Sphere sundial in Torrington Square and the Tamil poet, Thiruvalluvar. Supposedly restored in 2016, this latter statue nonetheless already seemed somewhat worn as his forehead and cheeks have suffered chips and cracks. 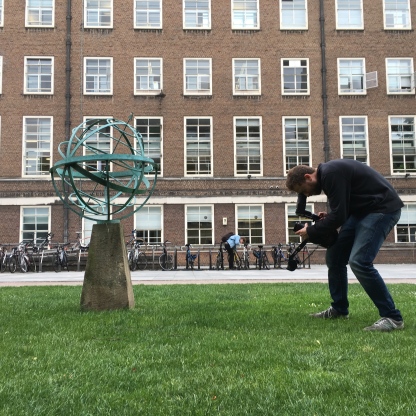 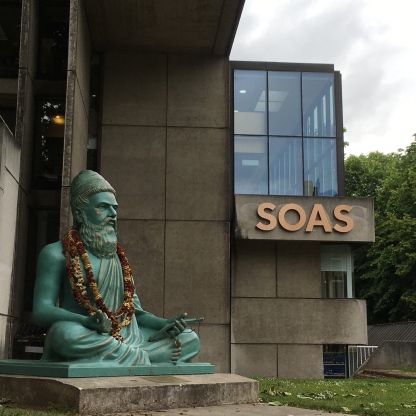 Nonetheless, I was touched by the quotation from Thiruvalluvar that features on a plaque at the foot of the statue:

You meet with joy, with pleasant thought you part;
Such is the learned scholar’s wondrous art

I cannot lay claim to realising the learnèd scholar’s wondrous art – but I endeavour to meet with joy as and when I can.

There followed a shot of Francis Russell, 2nd Earl of Bedford in Russell Square – a huge monument on a large raised plinth, with Russell looming over various sculpted animals, while metal railings preventing interaction all interaction with Russell except on the part of the birds that sit and defecate upon him.

Francis Russell with pigeon on head

The day ended with another Patricia Finch sculpture in Queen Square, this one being her Memorial to Andrew Meller, who worked with the Great Ormond Street Hospital – before we got in a quick shot of Sam the Cat, who also lives in the corner of that square. 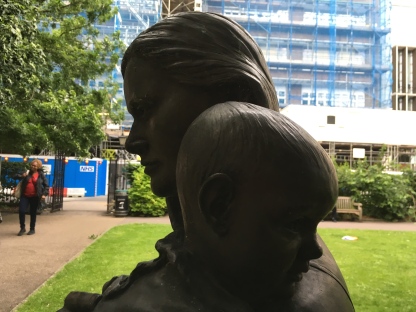 Hopefully only two more days to go and then we can move on to the editing stage of the film – with actress Lissa Schwerm hopefully to deliver the film’s vocal track in the next week or so, too.