Beg Steal Borrow are very excited about various upcoming screenings in the UK and further afield.

Firstly, En Attendant Godard has its Italian premiere on Saturday 28 February at the Associazione Kilab in Rome. William Brown will be at the screening, as hopefully will star Hannah Croft, who will also be out in Italy at the time to help promote her film, The Repairman, directed by Paolo Mitton and which is being given a nationwide release in Italy from the end February. 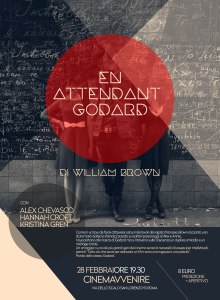 Shortly thereafter, Common Ground will have its UK premiere on thelatest.tv, the channel that also screened En Attendant Godard and Afterimages as part of their FilmFest at 8 season in late 2014.

And, finally, En Attendant Godard is also enjoying a screening at B-Film, an interdisciplinary and international research centre at the prestigious University of Birmingham. All are welcome to all three screenings!

Meanwhile, both Selfie and Ur: The End of Civilization in 90 Tableaux have now been confirmed as ‘real’ films as a result of their having each an IMDb page.

Finally, Beg Steal Borrow is gearing up for some more productions, starting with a second music video for Extradition Order’s song ‘I Love An Eyesore (LBJ 1960)’, and then hopefully a feature in the summer. And final finishing touches are being put to The New Hope. Busy busy!